Considering that making flashcards is my hobby, one consistently useful tool for me has been what is called the "Hipster PDA," which is nothing more than a stack of index cards and a binder clip holding them together. 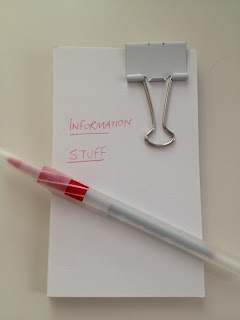 If a subject catches your attention and you wish to research it using SuperMemo later, simply jot it down on an index card. After you look the subject up and import a few articles into Incremental Reading, you can throw the card away.

If there is foreign language word you want to remember, you can quickly make a paper flashcard and familiarize yourself with the word until you feel comfortable enough to put it into SuperMemo for long-term storage.

They are also useful in giving others your phone number, e-mail, etc. quickly. Today paper is becoming more and more scarce in favor of some sort of electronic device.

I enjoy the act of throwing a "completed card" away, it feels like I am making progress in some intangible way.
Posted by LittleFish at 8:14 AM No comments: 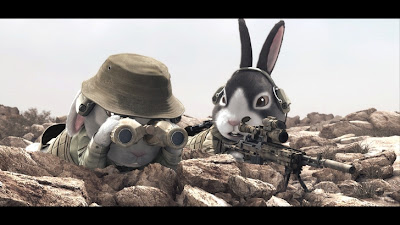 When using flashcards to retain information, it is easy to overestimate how much information you can store in a single flashcard. This mistake is often made when it comes to languages (There is also a great deal of debate in regards to this). What strategy seems new and exciting in the beginning eventually becomes tiresome months and months down the line (And your flashcards are no longer interesting because they are no longer new).

If you have spent any time making flashcards, you have no doubt encountered this principle in some way. While not overloading a single flashcard with too much information seems obvious when it comes to factual information, this seems to be neglected greatly when it comes to learning languages.

For example, if you were going to learn a Japanese character, often this kind of flashcard is made:

In other words, one flashcard is trying to do the job of three or four flashcards. Instead of structuring a flashcard in such a broad and ambiguous way, the more effective thing to do would be to create a few highly focused flashcards such as these:

Q: Write the Japanese character for "Sky" or "empty."
A: 空

Q: How do you pronounce this character when it is with other characters (ON yomi)? 空
A: クウ

Q: How do you pronounce this character when it is by itself (KUN yomi)? 空
A: そら

There are many different ways of pronouncing this single character, and this does not reflect what I believe to be an effective character learning strategy. BUT you can see that dividing and focusing on single knowledge units rather than a bunch of knowledge units at a time will result in more accurate records for your flashcard software. This will result in your long-term retention of knowledge.

A flashcard is a sniper, not a shotgun.
Posted by LittleFish at 7:50 AM 2 comments:

I've created a Twitter account, and I will answer brief questions using either this or the comments section in the blog.
Tweet me at: @Supermemofish
Posted by LittleFish at 9:29 AM No comments:

Life Pro Tip - What is the VALUE of "activity x"? 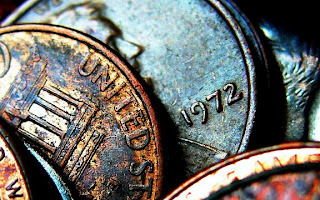 A very useful and worthwhile practice is to get better at assessing how valuable a certain activity is. Be it brushing your teeth, laying off certain foods, doing Supermemo, etc., whether you acknowledge it or not, you assign a certain value to things you do. That is why sleep becomes less valuable if your house is on fire (life > sleep) or you interrupt your book to talk to a cute girl (potential love > (possibly disposable) knowledge intake).
While not all decisions are as obvious as the above, here is an exercise to make assigning values easier:
The next time you have to do something (Clean the house, do Supermemo, attend class on time, etc.), ask yourself: If I could pay someone money to do this activity for me, how much would I pay them?
Try doing this as you think of various projects and activities that you need (or wish) to do. The better you get at assigning number values to your activities, the more objectively you can view your decisions as a whole.
This (And the things I'm going to post in the future) has been helpful in accomplishing tasks preventing me from learning more. After all, the quicker you can trick your brain into doing things you have to do leaves more time remaining for things you want to do.
Posted by LittleFish at 9:20 AM 1 comment:

Scribblings Of A Madman 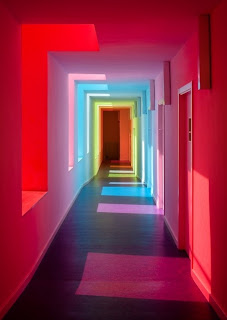 Hello; it's been a very long time since a previous post. Here's why:
For a bit of time I was kicking around the idea of writing a book about memory and Supermemo, but I have since opted out of doing this. Instead of unloading a large amount of information at once, I would rather dote it out in smaller chunks. Release many single songs on a consistant basis rather than an entire album with a great deal of time in between.
In an effort to simplify my life and embrace minimalism I've been trying to come up with what amounts to as an "Operating System for Life;" a series of principles/rules that can be applied to get work done as efficiently as possible. I've had mixed results over time, but I think I've found the overall solution; I'll post about it shortly.
Also, I think I've figured out a way to study/learn languages much faster than before, and I'm fairly certain I've learned how to make any piece of knowledge more "sticky," thus making it less likely to fall off the memory wagon as knowledge tries to make the journey from short-term to long-term memory.
All of this I will post about shortly.
Sorry for the long delay.
Posted by LittleFish at 6:03 PM 3 comments: